Maybe the "Worst" isn't so bad after all 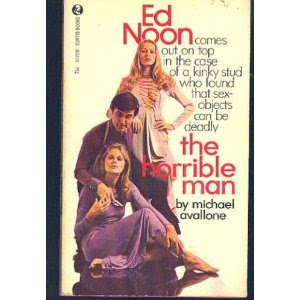 During the time when I was an active Authonomy member, I read some incredibly bad writing. But a yellowed newspaper clipping reminded me that these Authonomists couldn't hold a candle to Michael “The Fastest Typewriter in the East” Avallone.

The article, a “Weekend Whodunits” column by Henry Kisor, in the April 17, 1987 Chicago Sun-Times, reviewed Gun in Cheek: An Affectionate Guide to the “Worst” in in Mystery Fiction (Mysterious Press) by Bill Pronzini, a compendium of bad mystery writing, mainly of the hardboiled variety. Kisor begins with this excerpt from “one of a series of abominable pulp mysteries of the 1950s by Richard F. Prather, that featured a private eye named Shell Scott,” Take a Murder, Darling:

He was dead, all right. He had been shot, poisoned, stabbed and strangled. Either somebody really had it in for him or four people had killed him. Or else it was the cleverest suicide I ever heard of.

Two of the funniest examples were from the speeding typewriter of Avallone, who seems to have had trouble with human anatomy:

“His thin mustache was neatly placed between a peaked nose and two eyes like black marbles.” (Don't Die in Bed)

“She...unearthed one of her fantastic breasts from the folds of her sheath skirt.” (The Horrible Man)

Pronzini even finds examples from more contemporary mystery writers: “The sun [was] shining its ass off.” (Looking for Rachel Wallace by Robert B. Parker, “who of all writers should have known better,” remarks Kisor.)

“'It's a shame that a chunk of hellspawn like you should be one of the throng.'”

“'Say that again, filth, and my trigger finger will give a very nasty jerk.'”

But it's an American Kisor uses for the final quote in his column. “Nobody,” he writes, could construct a stumbling metaphor better than Joseph Rosenberger... in his Death Merchant spy series:”

Tuskanni stood in the open doorway at the top of the stairs, a .38 Colt automatic in his hand, watching as the burly drivers tried to bring down the two brothers—their efforts making as much sense as the termite who was a conscientious objector and went around trying to eat up draft boards.

The column inspired me to read Pronzini's book. As I recall, though, Kisor managed to get the best examples from the book. But rereading the article gives me pause to reconsider my judgment. All of the examples are in grammatical English, with no comma splices, dangling participles, or other errors. Richard Prather uses “all right,” as opposed to the “alright” which abounds in Authonomy—even among the better writers. (What's scary is that the spell check in Open Office Writer has no problem with “alright.”) Avallone may have had trouble placing the parts of the body, but he knew the parts of speech. Quite a few of my fellow Authonomists don't.

Amen.
Posted by steve on the slow train at 7:46 PM

Oh my god, those are some seriously awful lines. I hope I never make a list like that. Well not unless I try to.

Charles--I don't think you will.

are you sure these are not parts of some funny stories?
they would make hilarious lines.
otherwise...just awful.

i remember though that i wrote something similar...
**Hail’s left foot moved forward and raised his sword above his own head.**
oops.