Bob Dylan, Suze Rotolo, and "The Gypsy Laddie" of Spain 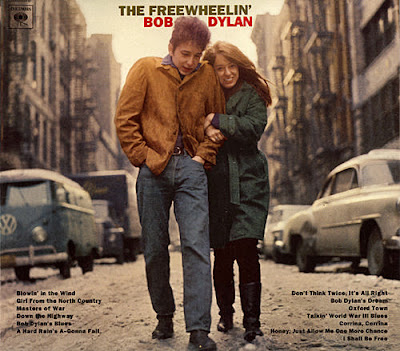 Remember the cover photo on "The Freewheelin' Bob Dylan," with Bob walking arm-in arm with a gorgeous blonde down an icy street in Greenwich Village? I was in my mid-teens when I first bought the record. In those days I yearned to be a folksinger, playing at hootenannies and at the coffeehouses of the Village and Chicago's Old Town. But I yearned even more to have a beautiful young woman on my arm as Dylan had.

The woman on the album was Suze Rotolo, who has just published a memoir about her love affair with Dylan and its eventual breakup. I haven't yet read the book, A Freewheelin' Time: A Memoir of Greenwich Village in the Sixties , but I heard Terry Gross's interview with Rotolo on Fresh Air. Rotolo was only seventeen when she met Dylan, but she was an artist who had worked in the civil rights movement. She was a "red-diaper baby:" her parents were members of the Communist Party. Rotolo introduced Dylan to the music of Bertoldt Brecht and Kurt Weill, which influenced his music.

Rotolo's relationship with Dylan began to crumble when she took the opportunity to go to art school in Perugia, Italy. Dylan did not want her to go. Dylan's song, "Boots of Spanish Leather," was his way of dealing with her leaving. Terry Gross did not seem to realize the significance of the title, though Rotolo, and anyone familiar with the folk scene, surely did. Here's the last stanza:

Many of Dylan's early songs paid homage to the English and Scottish ballads collected by Francis James Child and the Appalachian ballads compiled by Cecil Sharp. "A Hard Rain's A-Gonna Fall, " for example, is based on "Lord Randal," while "Masters of War" takes its tune from "Fair Nottamun Town." "Boots of Spanish Leather" uses almost the same tune as Dylan's earlier "Girl from the North Country," which references The Elfin Knight, but laments that "She once was a true love of mine," as opposed to the ballad's future tense: "then she will be a true lover of mine." But the song's title refers to another Scottish ballad, "The Gypsy Laddie," or rather its American variant, "Black Jack Davy." In it a gypsy seduces the lady of a manor. Americans weren't familiar with gypsies, so the seducer is usually called "Black Jack Davy." One version calls him "Gypsum Davy." Americans didn't know about gypsies, but they knew gypsum. Here's an American version I learned back in the Sixties:

The landlord he came quickly to his door,
Inquiring for his lady.
The answer that they gave to him:
"She's gone with black-eyed Davy."

"Last night you slept in a fine feather bed
And in your arms your baby.
Tonight you'll sleep on a cold riverbank
In the arms of black-eyed Davy.

"So you take off those high-heeled boots
All made from Spanish leather.
And give to me your lily-white hand
And say farewell forever."

In fact, it wasn't forever. Dylan and Rotolo got back together after she returned from Italy, though they broke up about a year later. But when he wrote "Boots of Spanish Leather," Dylan was sure that his own true love was saying farewell forever.

P.S. I found my beautiful young woman. One thing that brought us together was our love for the old ballads. I knew most of them only as poetry, but Kathleen, after years of listening to records by Jean Ritchie, Jeannie Robertson, and Ewan Macoll, could sing many of them. And in nearly 35 years of marriage, I've never had to ask for boots of Spanish leather.
Posted by steve on the slow train at 9:08 AM 6 comments:

I normally do most of my writing during my swing-shift break. I get off my Sunday morning shift at 2:15p and don't have to be back at work until 115p Monday afternoon. This Sunday, the evening shift clerk called in sick, and I ended up working a double, plus another hour and a half for a late southbound train--545a to 1130p. Needless to say, I was exhausted by the end of the night and was still recovering through my Monday evening shift. Chapter 18 has yet to be written. I seem to have the hardest time working in actual events--in this case, the barricade at Lincoln Park and Hugh Hefner getting swatted with a billyclub. In the meantime, here's a song about the street that connects Lincoln Park and Grant Park, by Aliotta-Haynes-Jeremiah from 1970. The "Hollywood" refers to a street in Chicago. The song was banned on some stations because of references to "LSD." It's just the initials of Lake Shore Drive, though I suspect the songwriters were chuckling to themselves while writing it.

Won't You Please Come To Chicago?

I'm back from three days in Chicago. While most of my days were spent in customer service training, I was able to do some research and to walk around the downtown area. At the microfilm room at the Harold Washington Library, I was able to copy articles from the Chicago Daily News (the best paper in the city at the time), the Village Voice, and the underground newspaper The Chicago Seed. The Voice had some excellent first-person coverage of the demonstrations from an outsider's point of view.

I read a sad reminder of just how intense the feeling was in those days:

Beside the body of the student... was an empty bottle of pills and a note saying she had killed herself because "she was depressed over the defeat of McCarthy," police said.

And I read that in spite of the Crosby Stills Nash and Young song, Abe Peck, editor of The Seed, begged people not to come to Chicago:

The YouTube video, by the way, was a high school history project. The four young men who made it certainly deserved an A.

In my walk around the South Loop, I visited the General Logan statue where protesters "took the hill," walked through the lobby of the Chicago Hilton and Towers (formerly the Conrad Hilton), and viewed the site of the Grant Park battleground. Like most other people, I find omens. I saw a good one Monday night. There, on Van Buren Street between Michigan Avenue and Wabash, was a white Volkswagen Beetle. Not one of the new ones, but one that was on the road in 1968, when my character Helena was driving her white VW between the South Loop and the North Side.

A break from the Web and a contest entry

I'll be out of the blogosphere for the next few days, while I'm in Chicago for Amtrak block training May 5, 6, and 7. I'm going up early on Sunday so I can do a little research at the Chicago Public Library. In doing research about the demonstrations during the Chicago Convention, I've relied mainly on four books: Rights in Conflict (The Walker Report), Chicago '68 by David Farber, No one was killed by John Schultz, and Norman Mailer's Miami and the Siege of Chicago. I've also had access to the Chicago Tribune on microfilm at the Bloomington Library. But the Trib was a pretty wacky paper in those days--here's the beginning of an August 25, 1968 editorial about Hubert Humphrey:

It will probably occasion little surprise among readers that in his former days around the family drug store in Huron, S. D., Hubert Horatio Humphrey was known to the clientele as Pinkie. But if the readers jump to the logical conclusion that this appellation had something to do with Hubert's political coloration, which is socialist, radical, and left-wing, if not precisely Red, they will be wrong. The tag was hung on him simply because of his complexion.

The Harold Washington Library will have the Sun-Times and the Daily News, and (I hope) The Seed, Chicago's premier underground paper at the time.

In other news, Tim Hallinan is sponsoring the following contest:

In response to something I wrote in the book roundup for April (about my once having eaten lunch with Cary Grant), Sylvia wrote the following sentence:

I once drank a beer in a dirt pit which had previously been Cary Grant’s swimming pool.

Lisa Kenney, who doesn’t miss much, immediately wrote to say that this was a GREAT opening sentence for a novel. I had thought the same thing; in fact, I’d figured out what the basic setup for the book would be. I’ll show you mine in a minute, but first, a contest:

I’ll give away four autographed copies of my new Bangkok novel, The Fourth Watcher, to the four people who come up with the best ideas for a novel that opens with Sylvia’s sentence. If there are more than four good ideas, I’ll sign and mail more books. Here are the rules:
Entries should be sent in the form of replies to this post.

No entry should be more than two paragraphs long.

Entries should be received by Monday, May 12.

Here's my entry--the paragraphs are a bit long:

I once drank a beer in a dirt pit which had previously been Cary Grant’s swimming pool. It was a strange place for a protest meeting, but it was appropriate. It seemed a perfect way to embarrass the Americans for a Classless Society. The ACS has nothing to do with Karl Marx. In fact, it doesn’t even call itself that. Something about progress. But it’s all about a classless society--a society without any class. I don’t know how long the ACS has been around--at least since 1964, when its operatives tore down New York’s magnificent Penn Station and replaced it with the unspeakably ugly Madison Square Garden. Since then, ACS has been hard at work, demolishing anything with class. If ever there was a poster boy for class in America, it was Cary Grant. Even when he played a millworker and fugitive from justice in “The Talk of the Town,” he had class. And the ACS was out to destroy everything connected with him. Including his swimming pool.

My wife and I got involved when the ACS decided to tear down the Blackhawk Hotel in Davenport, Iowa and replace it with a garish Las Vegas-style palace. We had spent our wedding night at the Blackhawk; Grant had stayed the last night of his life there. I had come to California to meet with others who were fighting the people who wanted to replace class with crass. The dirt pit was chosen because it symbolized just how far the ACS would go. But it turned out the ACS was ready for us. We were like the French at Dien Bien Phu--stuck in a valley and surrounded by the enemy. The cops dragged us out of the pit, just as we were finishing our refreshments. The media people, whom we had counted on, were nowhere to be seen. Round 1 for the ACS.
----------------------------------------------------------------------

My wife and I really did spend our wedding night at the Blackhawk, though it was many years before Cary Grant spent his last night on earth there. In 1973 it was a solid downtown hotel, with Maxfield Parrish reprints hanging on the walls. While it's now owned by President Casinos, I know of no plan to replace it with a Las Vegas-style palace.

All the best to my readers. I'll be back in the world of the Web on Thursday.
Posted by steve on the slow train at 8:56 PM 3 comments: