Forgotten Books Friday: "Up 'Til Now," by Eugene McCarthy 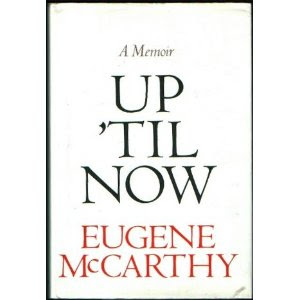 Some months ago I found Eugene McCarthy's Up 'til Now: A Memoir (New York: Harcourt Brace Jovanovich, 1987) on the library discard shelf. It's a witty and very readable look back at American politics from 1948 until the 1980s by the man who dared to challenge President Lyndon B. Johnson for the 1968 Democratic presidential nomination.
Up 'til Now includes a large section about the '68 campaign, but McCarthy's bitterness over it—especially over Robert Kennedy's decision to enter the race—makes it the weakest part of the book. But when he writes about his 1948 campaign for Congress and his years in the Congress, he's at his best. Take, for instance, his comparison of 1968 and his first Congressional race in 1948:
The support I received in the anti-Vietnam campaign of 1968 was described by some observers as motley and unprecedented. It was in fact little different from that which I received in 1948—from students, some old enough to vote, some not, old liberals, and party persons, especially women.
Or his description of the Philadelphia delegation to the 81st (1949-1951) Congress:

It was a noteworthy bunch, consisting of four members: Green, Granaham, Barrett, and Chudoff. They were all of the same height, roughly five feet four inches. The word was that Bill Green, who was the political boss of Philadelphia, would not approve any Democratic candidate for Congress who was taller than he. None of the delegation was. Moreover, the delegation of four sat in the last row of the House Chamber and voted as one man.
When he gets to his 1968 campaign, he seems defensive. He never really explains why he made virtually no effort to win after the California primary, except to write, "After the assassination of Robert Kennedy, the chance of carrying the antiwar issue at the Democratic convention was, barring unforeseen developments, lost."
His bitterness about Kennedy colors his entire treatment of 1968. He has a point—Kennedy's organization did run a ruthless primary campaign against McCarthy, in addition to coming into the race only after McCarthy had made his impressive showing in New Hampshire. Still,
McCarthy has nothing to say about the 1968 Democratic Convention or his lukewarm endorsement of Hubert Humphrey after Humphrey broke with Johnson on Vietnam.

He's surprisingly kind to Richard Nixon. "I think it fair to say... quite possibly no one could have done any better in ending the war unless he had ended it sooner, but quite certainly no one could have done any worse."
But he does go on to write that "traces of the old Nixon showed through." McCarthy is bothered
less by Watergate than by Nixon's 1971 "enemies list."
In the final section of his book, "Entropic Politics," McCarthy writes,"The politics of the United States, and especially of the Democratic Party, following Watergate and the end of the Nixon administration might best be labeled 'entropic,' a state attributed to society generally by Professor John Ahearn of Stanford University as having 'no goal' and 'no path of effective action.'"
McCarthy sees the America of the late 1980s as "overtransported and overfueled... overdrugged... overadvertised, over info-tained...overbureaucratized... overincorporated... overdefensed."
In the course of his scathing, but largely accurate assessment of American society, he goes on to say, "President Reagan and his administration have judged the growing power of the corporation to be a good thing." Yet he does not explain his 1980 endorsement of Reagan over Jimmy Carter, who had proposed an extensive program of energy conservation in 1979. While McCarthy's personal dislike of Carter is well-known, McCarthy must have realized that Reagan was working hand in glove with the multinationals.
In spite of all its shortcomings, Up 'Til Now is a refreshing look at American politics. And in a time when the TEA party folks are screaming for term limits and denouncing career politicians, McCarthy's book reminds us why we need professional politicians. In what is really a eulogy for Senator Philip Hart of Michigan, he writes:
Philip Hart was a politician. He recognized politics as an honorable, necessary, and difficult vocation. He practiced it not as "the art of the possible," which is wholly inadequate as a definition, but as a discipline of mind and will, as a profession that should carry the common good beyond what is considered prudent and possible. He knew that politics is not a game to be scored, to be marked by winning and losing, but that it is a continual challenge.
I was too young to tramp through the snows of New Hampshire for Gene. I did what I could, selling McCarthy's Million buttons to my high school classmates, and working to nominate McCarthy at the Cedar Falls High School mock Democratic convention. (See "When I was Clean for Gene.") Even though it reminded me of McCarthy's many contradictions, quirks, and foibles, reading Up 'Til Now gave me a new respect for the man, who died in 2005, and for the thousands of idealistic students who cut their hair, put on suits and dresses, and went off to campaign for the only Democrat willing to challenge LBJ over Vietnam.
Posted by steve on the slow train at 5:03 AM

Like Stevenson, he was probably just too intellectual for the average voter. I wonder if he'd been a good president.

I haven't read it. I'm not sure I've heard of it, though it sounds vaguely familiar. I really almost never read political books. the last one I read was "the best damn lawyer in a one laywer town"

I admired McCarthy and shared his disappointment when Bobby jumped in, but haven't thought about him in years. This could be an entry for Forgotten Politicians Friday.

Thanks for a really interesting review. I didn't know anything you mentioned about McCarthy except for 1968. I've always wondered why he didn't seem to try hard after Kennedy's assassination, and I guess I'll still wonder. I remember Schlesinger's RFK bio, which treated McCarthy as a kind of Sartre, spending his days philosophising with his campaign staff and not expanding beyond his base. (Of course, Schlesinger loved the Kennedys.)

Was he saying that Nixon got us out of Vietnam about as fast as anyone could have?

It seems like politics was more creative and fun back then, possibly because of the ideological overlap of the parties that has finally and entirely disappeared in Congress, if the health care vote is any indication. One wasn't hounded out of a nomination for simply hugging the President of the United States, for instance.