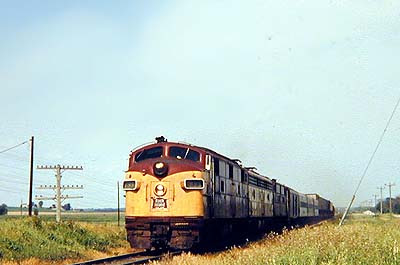 Note: The following was submitted to the Des Moines Register as a guest editorial. As the Register has apparently decided not to use it, I'm posting it here. Photo Credit: Ron Goodenow. (Train No. 7 near Grinnell, IA, late 1960s or 1970)
On May 31, 1970, I took Trailways from Iowa City to Davenport, walked across the Government Bridge to Rock Island, Illinois, and walked a few more blocks to the Chicago, Rock Island and Pacific Railroad station. I was there to ride the last run on the Rock Island Lines' Train No. 7, which, along with its eastbound counterpart, No. 10, were the only passenger trains serving Des Moines and Iowa City. The Rock Island depot was filled with families taking the children for a first, and presumably last ride on the train. They rode from Rock Island to West Liberty, West Liberty to Iowa City, and so on down the line to Council Bluffs, the train's western terminus. Forty years later, Des Moines, Iowa City, and the entire state of Iowa north of U.S. Highway 34 still have no passenger train service.
From the vantage point of 1970, that wouldn't seem very startling. Louis W. Menk, who was about to become chairman of the newly-merged Burlington Northern Railroad, appeared on NBC's Today Show on February 26, 1970, and said, "in my view we ought to let the intercity passenger train, the long-distance passenger train, die an honorable death, like we did the steamship, or the riverboats and the stagecoach and the pony express." Gasoline was cheap, the airlines were profitable and expanding, and passenger trains were being eliminated all over the nation. Des Moines wasn't even the biggest city in America without rail passenger service. Dallas, Texas had that dubious honor.
But even though things looked bleak for the passenger train, there was change in the air. Congress was working on a bill, popularly known as Railpax, that would create a quasi-public corporation to operate a national network of passenger trains.
In fact, the Rock Island was desperate to eliminate its passenger service across Iowa because the Railpax bill would put a hold on train discontinuances. And because membership fees in the proposed National Railroad Passenger Corporation would be based on the railroad's passenger train losses for 1969, the Rock Island wanted to stay out. (The railroad had claimed a $1.3 million loss on Nos. 7 and 10 for 1969. It had also run a Minneapolis-Des Moines-Kansas City train for the first half of 1969, for which it claimed huge losses.) It was cheaper to run its two remaining intercity services: Chicago-Rock Island and Chicago-Peoria, than join NRPC.
The Interstate Commerce Commission, the agency with jurisdiction over passenger train discontinuances, gave the Rock Island what it wanted, and allowed the line to drop Nos. 7 and 10 before the ICC held hearings on the discontinuance petition. Normally the ICC would order the trains continued during the hearing process. As expected, the Commission reaffirmed its original decision, and the Rock Island remained "freight service only" west of its namesake city. (The Rock Island and Peoria trains survived until the end of 1978.)
Meanwhile, President Richard Nixon signed the National Railroad Passenger Act of 1970 on October 30 of that year, and Railpax emerged as Amtrak on May 1, 1971. In spite of efforts by every administration from Nixon through George W. Bush to curtail or eliminate Amtrak, passenger trains continue to cross the nation. And President Obama, with assistance from his train-riding vice president Joe Biden, has made high-speed rail a priority of his administration.
In 1974, when the energy crisis made the fuel-efficiency of rail attractive, it seemed likely that passenger trains would return to central and northern Iowa. The Iowa Legislature even approved $4 million for passenger train service that year, but in what state Representative Stephen Rapp (D-Waterloo) called a "sell-out," the appropriation was eliminated in conference committee.
Amtrak planned a Chicago-Des Moines train in 2000, when then-CEO George Warrington thought the corporation could make money by hauling freight as well as passengers. The expected freight contracts never materialized and the plan was dropped.
In the forty years since I stepped on board the last No. 7, I've promoted rail passenger service both as a citizen and for the last 26 years, as an Amtrak employee. But though I've lived out-of-state since 1981, I'm still an Iowan at heart. It's refreshing to hear of Governor Chet Culver's interest in reviving intercity rail service in Iowa.
I hope Iowans will continue to work for fast trains in the Hawkeye State. Another forty years is too long to wait for good public transportation in Iowa.
Posted by steve on the slow train at 12:10 PM

Nice piece. I've not ridden trains very often but do enjoy it very much.