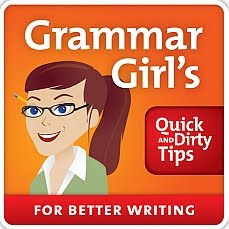 Grammar Girl says I should put only one space between sentences. It’s a hard habit to break. Back in the 1967-68 school year at Cedar Falls High, the typing instructor stressed that the break between sentences required two spaces. It was the one thing I really learned from that class, which I passed with a D. My biggest problem with typing, then and now, is that I can’t type without looking at the keyboard. Believe me, I tried. And I felt lucky to escape with a D.

According to Grammar Girl (a.k.a. Mignon Fogarty), typewriters were designed so that each character had an equal amount of horizontal space. To make a clear separation between sentences, a second space was necessary. But present-day word processing programs have done away with letter equality. They’re also designed to regulate the space between sentences, so the two-space rule can foul things up for the publisher.

She’s probably right. Still, I hate to give up the sum of my knowledge from that long-ago class. My girlfriend in my next and final year of high school, at University High School in Iowa City, was an ace at the subject (along with all of the other subjects), and referred to it as if it were a Chinese martial art: Tai Ping. She would have earned a black belt had the school awarded them. (Like most high school romances, ours did not last; she and I are both married, but not to each other. I'm really glad we're friends, though.)

She now makes good money with her prestidigitation, surely typing on the 21st century equivalent of what the Harvard Lampoon called a "a supercharged, fuel-injected, 345 hp Smith-Corona.” (Bored of the Rings) What’s more, she uses the Dvorak keyboard. Well, actually, she uses a QWERTY keyboard, but programmed as a Dvorak. For somebody who has to look at the keys, it’s well nigh miraculous. (Dvorak Simplified Keyboard below [Wikipedia])

A note of explanation: when typewriters were introduced in the nineteenth century, manufacturers experimented with a lot of different keyboard formats. The biggest problem with manual typewriters was that a fast typist would jam the keys; the QWERTY format reduced the jamming problem and thus became the standard of the industry. But in 1961 when IBM introduced the Selectric, with its rotating type head, there was no longer a jamming problem. And the QWERTY keyboard wasn’t necessary.

Enter August Dvorak, who had, in 1936, redesigned the keyboard with help from his brother-in-law , Dr. William Dealy and ther friend Etaoin Shrdlu. Shrdlu, as I discovered by reading Harvard Lampoon’s 1968 parody of LIFE, is not really somebody’s name, but the twelve most common letters used in the English language. If you look at the QWERTY keyboard, you’ll see that the three most common letters are on the left side. And most are not on the middle, or “home” row of keys. Dvorak's redesigned keyboard makes it possible for professional typists to type much more rapidly. This was true even before the IBM Selectric and computer word processing, but with the decline of the manual typewriter, the last reason for the QWERTY keyboard as a standard has disappeared—at least for touch typists, If you’re Steve Wylder and have to look at the keys, it doesn't much matter. I'll stick with QWERTY.

I've been doing that 1 space thing after periods too and it is very hard.

You got a D in typing class too? Huh! I liked the article very much. When I took typing. when they put the cardboard covers over our hands so we couldn't see the keyboard I was lost. And they always pumped loud pop music into the room making the agonizing process even harder to concentrate on. For the brief period I used a Dvorak keyboard I was amazed. I think I described it as "painfully logical." It made so much sense it hurt...
I don't think I could break out of two spaces after periods either. Just couldn't do it.