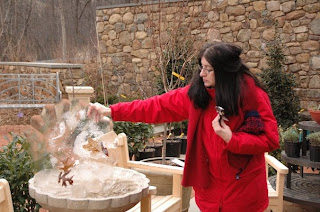 Sometime before Christmas, our daughter Sarah and her husband, Vainateya Deshpande (Desh), who live in Washington, D.C., invited my wife Kathleen to visit during Inauguration Week. She left on the train from Elkhart Friday, January 16, in below-zero temperature. It was still pretty cold on Sunday, when the three of them visited Monticello. Here she is at a frozen birdbath outside the house. But to me, she seems a dark-haired Galadriel at her magic mirror. 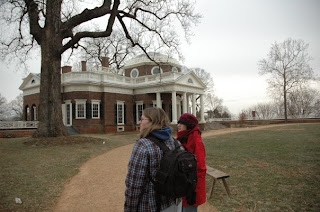 Kathleen says that the underground part of the house extends beyond the limits of the house itself. Here are Kathleen and Sarah admiring Jefferson's house. Desh is saddled with the Curse of the Photographer. He took all the pictures, so he doesn't appear in any of them.

On Monday they went to the Udvar-Hazy Center of the National Air and Space Museum, in Chantilly, Virginia. It's big enough to hold the Space Shuttle Enterprise, an Air France Concorde, the B-29 Enola Gay (the plane that dropped the first atomic bomb), and hundreds of other complete aircraft. Desh got a picture of Sarah and Kathleen in front of a P-47 Thund 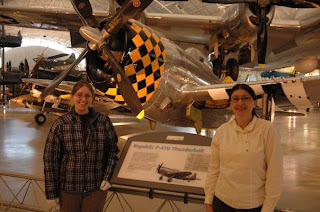 erbolt, the type of plane my father flew in World War II.
Tuesday, January 20 was the big day. The original plan was to join a friend of Sarah and Desh who was a staffer for Senator Edward Kennedy and observe the inauguration from the balcony of Kennedy's office. Somehow that plan fell through. But since the Senate office buildings are on the other side of the Capitol, there might not have been a lot to observe. Instead, they went to the Newseum on Pennsylvania Avenue, where they could see the procession from the White House to the Capitol and the Inaugural Parade. And they could watch the ceremony on a JumboTron. The Washington D. C. Transit system worked well for them. They took the bus from Sarah and Desh's apartment and arrived without a problem. The problems
began after they got to downtown Washington, where they had to 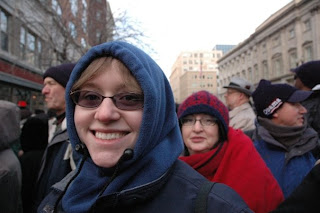 al with long lines for security checks. The two hours of waiting did give Desh an opportunity to show the crowd and some of the individuals in it. One of the youngest participants in the festivities charmed everyone who saw her. While most of the people waiting to see the inauguration were foc

using on Barack Obama, quite a few
were more than happy to see the departure of George W. Bush from the Executive Mansion. It's been eight very long years. 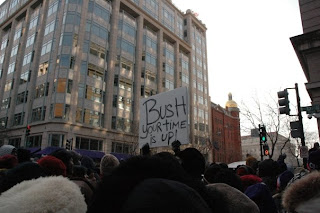 CNN was broadcasting from the Newseum. From her vantage point, Kathleen saw Cokie Roberts, Campbell Brown (who was noticeably 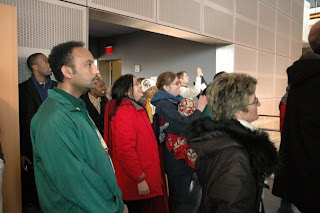 pregnant), and George Will. 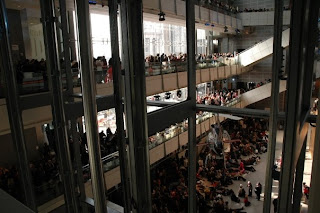 Even though the people in the Newseum were inside, people kept their coats on. Still, it was a lot more comfortable than being out on the Mall in the 20-degree weather. And if they couldn't see the Inauguration directly, the JumboTron provided a larger-than-life view. 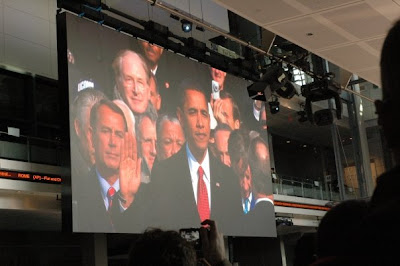 After the inauguration came the parade, with the wedge of police motorcycles bringing up the front. You can see beginning of a long line of portable toilets on the other side of the street. Somehow the crowds weren't that big on that side of the Avenue. I'm not sure the port-a-potties served their purpose.Then came the motorcade--the security and media vehicles and the President's 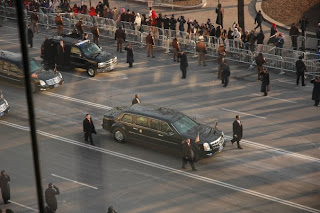 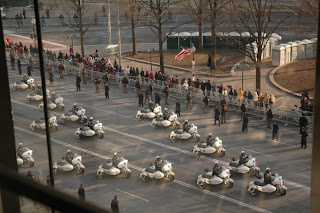 Escalade--followed by more limousines and and security vehicles. Kathleen saw Sasha's pink mitten in the window. The parade, which went on for hours, included this 1950s-era Washington, D.C. transit bus, which garnered a lot of applause. I once drove a bus very much like this one when I was a student at the University of Iowa and drove the Cambus in a loop around the campus. There were a couple of 1953-vintage buses that were eventually replaced by modern 1956-models. This was in the early 1970s. There were a lot of bands, many from historically black colleges. 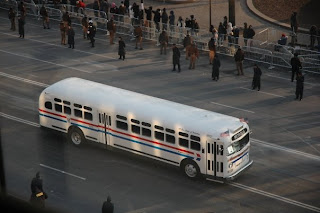 The Illinois float, with its John Deere tractor and image of Lincoln, was a highlight of the parade. 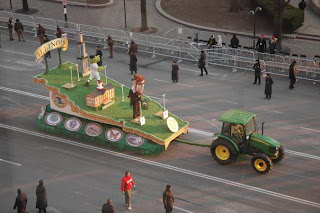 With the parade over, it was time to head back to Sarah and Desh's apartment, though not before eating an exorbitantly-priced meal at the Newseum cafeteria ($5 for a Coke, $9 for a personal pizza). Both Kathleen and Sarah came down with colds after their adventure, but it was surely worth it. I doubt whether there will be another inauguration like it in their lifetimes.
Posted by steve on the slow train at 10:32 PM

I heard that the there was far less usage of the port-o-potties than expected. I don't know what that means.

Due to issues at the security check point a lotless people were let into the secure area where the PP's were located. So the ratio of PP per person in the security perimeter was magnitudes higher than expected. We could see a bunch of empty spaces and people were able to run paralell to the limo for quite a distance ...

awesome experience and in some ways, for all of us, whether we were there or not.

How wonderful for Kathleen to have this opportunity. It looks like she had a great time... even with enduring a cold afterward.

As for another inauguration like this during our lifetime... sad to say, but I agree, although I wish that this spirit could always prevail at such time to celebrate our democracy in action.

And yet I want to wee more when it's cold!

I'm walking some of the same streets this week, passed the Newseum which I will visit someday. Some of the parade viewing stands are still in place.

Went to the Air & Space museum on the Mall today. Will have to figure out how to get to the one in Va. sometime, as well as Monticello.

I'm excited about the new administration, but at the same time am sorry that voters have such short memories. Take from that what you will.

Wonderful photos and narrative, Steve. HOPEfully, it's the beginning of a great adventure for all of us!

Charles--Vainateya pretty much explains it. It seems that the security people and the potty people weren't coordinating things.

Vainateya--Thanks for the explanation, and the wonderful pictures.

Elizabeth--Yes--Awesome for all of us.

Lilith--I wish the spirit could prevail as well. Obama has inherited an economic situation not as dire, but far more complex than the one FDR was saddled with. I think Obama has the same "first rate temperament" that O.W. Holmes said of FDR, and with a first-rate intellect as well.

Olivia--I'm enjoying your photos of D.C. taken just a few days after Kathleen was there. Yes, a lot of people have short memories. This middle-aged curmudgeon is still optimistic.

Had a look online for Wapping Old Stairs and came up with this video on Google among other refs. Don't know the area myself but hope this is some help.

Julie--Thanks for the comment and the link. I'm glad th Old Stairs survived the Blitz.

How great to get this "bird's eye" view of things. I was on the Mall . . . and somehow, I didn't feel the cold as much as I feared I would--I truly think the warmth of the moment helped!

Judy--Kudos to you for braving the cold, even if the warmth of the moment helped. And thanks for commenting.

I did not expect this event to be so special with all this parade :O
Thanks for the good pictures and I loved some of your insightful comments, mwah-hah.

Udvarhazy is definitely a Hungarian name. Can you throw some light on my ignorant blak spots of my knowledge, please?

that is black, of course

Szelsofa--Steven F. Udvar-Hazy was born in Budapest and raised in California. The center is named for him because he donated a lot of the money to create it. (I didn't know anything about him until I looked it up 2 weeks ago.) He's lost quite a few of his billions in the stock crash. See

What an incredible post and fantastic pictures. Thank you to you and your family for sharing. Can it really be that this all happened less than a month ago?

Lisa--Actually, to me it seems more recent. When I went to church last Sunday in Bloomington, Illinois, we prayed for "Barack, our President, and Pat, our Governor." It was a shock, but a pleasant one.

We're about twenty minutes west of the Udvar-Hazy Center! (But I was working that weekend, with a few hours off to watch the inaugural on TV.)

You describe Kathleen's wonderful picture at the birdbath well. Your son-in-law took some splendid photos. But I don't know if not being pictured is such a curse!

Peter--Thank you for agreeing with me on my dark-haired Galadriel.

Glad you had some time to see the inaugural on TV.