The Pitfalls of Dog Ownership, or Contemplating 1970s Trailer Life 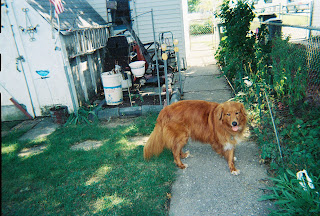 Ten years ago this December, a dog followed my daughter Sarah home. Well, not exactly followed. Sarah coaxed him back with soothing words. Sarah had been wanting a dog for some time. She knew that my childhood dog had been a Golden Retriever mix. The dog she led home looked a lot like him. When I got home that night, Kathleen said she had a surprise. I came into the living room and saw a beautiful Golden Retriever mix, with white paws and a black spot on his muzzle, sitting on my son Jim’s lap. I couldn’t say no. Jim named him Copper, because he was the color of a copper penny.
Copper was a stray, and he had been abused. For quite a while he was afraid of me. He had no problem with women and children, but he was terrified of adult men. We checked with the city, and the animal control people said that it we had him for 30 days, he was ours. We took him to the vet, and he got the requisite shots, along with treatment for three different kinds of parasites--hookworms, roundworms, and tapeworms.
About a month after we got him, some children came to the door and said that Copper was their dog. The family who owned him had taken off for the month of December. Recreational vehicle manufacturers often shut down for a month around Christmas, giving their employees an unpaid vacation. The dog had gotten out of their yard, and the family had left town without the dog. Kathleen told them that we’d already spent $150 on the dog, and that she’d have to talk to the children’s parents. We never heard anything from them again.
He’s been a wonderful companion for the past decade. For an eleven-year-old dog, he’s in good health, and can still do a walk of several miles and (unfortunately) jump a fence. But we’ve just learned the pitfalls of dog ownership.
We own a house in Elkhart, Indiana--a big, three-bedroom American Foursquare, which we have no hope of selling until spring. We’re slowly getting the house ready to sell--drywall work, plumbing, and electrical work, along with some other less important work. And slowly moving stuff out of the house to Davenport, Goodwill, the recycling center, or the landfill.
Meanwhile I’m staying in Davenport with my in-laws, driving the 55 miles each way to my job in Galesburg, and then a seven-hour drive to and from Elkhart every week. I have a week off, so Kathleen and I came to Davenport to look for a temporary place in Galesburg--a small house or even apartment to rent between now and next year. We figured there would be lots of places to rent. There are literally hundreds of vacant houses in Galesburg, a city which has yet to recover from Whirlpool’s closing of the former Maytag plant in 2004.
But nobody wants to rent, especially to a couple with a dog. People would rather let their houses sit empty rather than take a risk on renting. We visited two real estate agencies who gave us little hope. We got the same reaction from the third, but just as we were walking off in disappointment, an agent, appropriately named Carl Admire, asked us to come back to his office. He gave us some other alternatives, and showed real concern for us.
The one alternative that seemed to make sense was to buy an older mobile home, use that as my Galesburg residence until we sold our house, and then sell the trailer and buy a real house. It’s something we might be able to afford. The mobile home we looked at is in a decent park, populated mainly by retired people.
The trailer dates back to 1978 and looks it. Those 1970s colors of burnt orange, avocado, and harvest gold predominate. There’s even a built-in radio with an 8-track tape player. I’m not bothered by such things as orange carpets, though Kathleen is. But we’d own it (though having to pay lot rent), and Copper would be with us.
Posted by steve on the slow train at 3:08 PM

What a beautiful story. You and your family are truly wonderful people. If only there were more like you.

Animals really can become part of the family. Glad you've got some possibilities to keep Cooper with you. Good luck.

Amazing that people with empty houses won't rent them. Are they trying to be part of a "keep rental units scarce so that rents will stay high" movement?

I was so spacy this morning that I was reading your post thinking I was reading my nephew's blog and wondering why I didn't know he had children named Jim and Sarah! I'm such a cadet sometimes!

I think 1970s trailer life would be fantastic. Maybe you could even wear 70s vintage clothes. You could wear a mullet and your wife a Farrah Fawcett thing. Yourkids could wear bell bottoms and Danskin unitards.What an experiment -- sort of a 70s version of those shows where people go back to the 19th century and live without heat, etc. Think what a fabulous blog you could create.

Gerry--I think a lot of the people with empty houses have paid off their mortgages and just don't want to risk damage.

Elizabeth--Thanks for the suggestion. It might scare my son, though. At a Halloween dance last year he broke his foot doing a John Travolta imitation to the tune of "Stayin' Alive." He had another brush with the ghosts of 1978 that my 56-year-old brain can't remember. But hey, he's at college in Hanover, Indiana. If we do buy the trailer, it's an empty-nester's special.

Hope this works out, Steve - we hit a rental problem recently for one of our offspring who wanted a short let. Very frustrating when there's just no 'give'.