John Ruskin, John Millais, and the Ideal of Womanhood 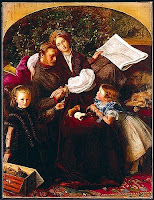 A lot of us men idealize women, especially the women we love. I'm guilty. Unfortunately, when the woman falls short of our ideal, which inevitably happens, things can go very wrong. In most cases, we come to realize that our beloved is just as human as we are, and we go on to love her with all her imperfections. Yet sometimes the idealization can go too far. Take the famous case of the critic John Ruskin and Euphemia "Effie" Gray (the model in the painting at left, Peace Concluded, by John Millais). Ruskin had fallen in love with Gray when she was very young, and had written the fantasy novel, The King of the Golden River, for her when she was twelve. They married when she was 18. According to Gray, he was an oppressive husband. That wasn't unusual. What was unusual was that Gray was still a virgin five years after her marriage.
Ruskin had championed the Pre-Raphaelite Brotherhood of artists and had taken a special interest in the painter John Everett Millais. Effie Gray had posed for a Millais' painting, Order of Release (right). Millais then accompanied the Ruskins on a trip to Scotland, where he fell in love with Effie. She had her marriage to Ruskin annulled on grounds of non-consummation and subsequently married Millais.

Why had Ruskin refused to make love to his wife? In a letter to her father, Effie wrote, "He alleged various reasons, hatred to children, religious motives, a desire to preserve my beauty, and, finally this last year he told me his true reason... that he had imagined women were quite different to what he saw I was, and that the reason he did not make me his Wife was because he was disgusted with my person the first evening 10th April." And Ruskin confirmed it in a statement to his lawyer during the annulment proceedings: "It may be thought strange that I could abstain from a woman who to most people was so attractive. But though her face was beautiful, her person was not formed to excite passion. On the contrary, there were certain circumstances in her person which completely checked it."
What was it about this beautiful woman that so repelled Ruskin? Mary Luytens, in a biography of Ruskin, suggested it was pubic hair--he expected her to look like a classical Greek statue underneath her clothes. Other historians have suggested menstrual blood or body odor. We shall never know, but I think Luytens' theory makes the most sense.
Millais seems to have had no problem with Effie's body; they had eight children together.

And there's one more bizarre note to this story: Millais painted this portrait of Ruskin while he was in love with Effie: there must have been an incredible strain between the two men, but they stoically finished the portrait.
The story of Ruskin, Gray, and Millais has inspired a number of stories, plays, films, and even an opera. Check out Wikipedia for the particulars.
Although it's very much a Victorian tale, it's a reminder to those of us who idealize the beloved in body, mind, or personality. These beautiful beings are just as human as we are. (Peace Concluded and Order of Release uploaded from WikiMedia; Ruskin's portrait uploaded from Victorian Web.
Posted by steve on the slow train at 3:37 PM

That is kind of weird, although I can think of some psychological possibilities. I guess I'd rather not say them in public.

Weird, but reminds me of these days...media distorts the way we think about our bodies...(I had the famous Dove campaign in my mind while writing this), but back then, media was ...was it? where was it?
So it must have been some inner psychiological obstruction or some weird idea in his mind...strange indeed...

one might think he thought she was some etheral, non-material entity, but when he saw she had pimples and some fat here and there...
who knows...

Extreme madonna/whore complex? Gay, turned off and unable to face it? Severe repression? I suppose in Victorian times, the disconnect between what people saw on the outside and the actual naked truth was vast. Yikes.

I'm at a loss as to why I, or anyone, would be interested in these people's personal lives. But, then, I feel that way about all artists, or others doing things which might be worth my attention. Don't talk, just show me your work and shut up. I don't care to know the name of your cat, your opinions on love, or what you ate for breakfast. If your work doesn't say it, I don't wanna hear it.

Charles--I'm sure thert are a lot of psychological possibilities. Some believe ruskin was a pedophile, as he later developed an obsession for another young girl. But he did not want to marry either girl until she came of age.

Szelsofa--I think Ruskin had this classical ideal from Greek sculpture. Effie Gray epitomized the High Victorian standard of feminine beauty. but she wasn't a classical statue. Ruskin obviously had some serious psychologicsl problems that went far beyond a simple idealization.

Lisa--I like "Yikes." I don't think Ruskin was gay--if the pubic hair theory is true, he might have been shocked that she had hair in the same area as men. We'll never know for sure. As the British novelist L.P. Hartley wrote, "The past is a foreign country: they do things differently there."

Gerry--Call it simple curiosity or voyeurism, but I'm fascinated by the private lives of people in the past--especialy brilliant ones such as Ruskin and Millais. I'm pretty sure Effie Gray was also brilliant, but High Victorian society did not give her a lot opportunity to show it.

What a great story! I had enjoyed Rushkin, and I suppose I will always love some of his work, and this sheds an interesting light on him. Did he ever remarry?

I didn't mean to sound snippy or preachy in my prior comment. I guess I'm just missing the gene which allows for interest in the personal lives of people I don't know. But, really and truly, I have no such interest. If I look at a painting, or collection of an artist's works (visual, written, etc.), that's all I need to know about that individual, and, truly, I would think an artist would have no trouble with that (it would certainly keep the Papparazzi down!).

This doesn't extend to the blogs I enjoy and read regularly. Although all I know is what people write or post as pictures, the very purpose is getting to know them, and I enjoy that.

thanks for this post steve, the idealisation thing can ruin much more than one could ever suspect...

there's a fascinating dutch novel, written toward the end of the 19th century, which also deals with this subject from a psychiatric point of view

Tea--Ruskin fell in love with Rose La Touche when she was a child, but did not propose to her until she was seventeen (and he was 50). Rose's parents opposed the marriage. She also turned him down after she was free to marry without her parents' consent. After Rose's death he had no further romantic attachments.

Gerry--Thank you for your clarification. Your point of view is in keeping with the post-World War II New Criticism, which viewed literature strictly for itself.

Bart--Interesting. Is this novel availabe in English?

Why have I waited so long to check out your blog? The gods may never know. I am an art history freak (though not yet a qualified one...we're getting there) and I love stories and bits like this. Well posted and WTF. I think it's a fascinating example of how history and human nature tend to run on the same set of hamster wheels but seriously, he was almost the original Humbert Humbert.

I've read that Humbert Humbert may owe something to Ruskin.

Riss said...
This comment has been removed by the author.
1:29 AM

TwoBlueDay-I agree to some level. I seem to have an overactive curiosity gene in the lives of past artists, but I think in a lot of ways the line "this piece is about..." is the most abused. It's a copout for a lot of bad artists. however....this being said, i think that knowing history and details can really enhance the visual. I say this because sometimes what people discuss with paint or writing or whatever is an abstract representation in their mind of what they are feeling. I'm just offering, not trying to convince anyone of anything here hehe. I just like talking. (c:

Steve-I'll be back definitely. I am looking to get into an Art History Graduate school. Thoughts? From whomever? I have vague ideas where I want to go but I'm aiming sort of high.

I don't doubt that dear old H.H. was based off of this guy in ways...that attraction is just another spoke in the hamster wheel.

I need an edit comment button. I repeated myself. Forgive me. (c:

The whole Ruskin/women thing is interesting but he is not alone at that time in the idealisation of very young women, even girls. Famously, Lewis Carrol and Alice Liddell comes to mind and Dickens', both in life and in his novels...all highly intelligent men. I do not know if there has ever been a study of the phenomenon in the context of 19th Century England, but it's an idea if anyone is interested enough. Fascinating really...'If I had world enough and time'...

I found this site using [url=http://google.com]google.com[/url] And i want to thank you for your work. You have done really very good site. Great work, great site! Thank you!