"Then Came Bronson:" A View from the Cutting Room Floor

It's summer, the season of exhaustion for those of us in the travel business. So here's a vignette recycled from early December, 2004:

I turned 53 (a prime number) November 30. My brother sent me a birthday card containing a reminder of a long-ago trip and my one encounter with network television. In the summer of 1969, I took a train-bicycle trip to the Tetons. I rode the train from Iowa City to Victor, Idaho, changing trains in Omaha, Pocatello (ID), and Idaho Falls. The last leg of the rail trip was by mixed train (a combined freight-passenger train, in this case, a freight train where passengers rode in the caboose). From Victor, I bicycled over the Teton Pass. Somewhere in the Grand Teton National Park, there was a sign announcing the filming of a new TV series, "...Then Came BRONSON." Shortly beyond the sign was an assortment of trailers and tents of the film crew. I must have been something of a sight, with a frame pack on my back, on my trusty Raleigh Sports, loaded with two full saddlebags.

As I was riding by, somebody on the film crew called over to me, asking whether I wanted to earn ten dollars. Of course I did. Ten dollars in 1969 was the equivalent of forty or fifty dollars today. I was ushered into one of the tents, where I signed a contract which, according to one member of the film crew, bound me to MGM (now Sony??) for the rest of my life. I rode past the cameras a couple of times, and that was that. Alas, the footage ended up on the cutting-room floor.

The NBC series, "Then Came Bronson" (the ellipsis preceding the title seems to have been dropped), lasted all of one season, 1969-70. It featured Michael Parks as Jim Bronson, a San Francisco newsman who quits his job after a friend commits suicide. He then sets off on a motorcycle journey through the American West. Some have said that it was TV's answer to Jack Kerouac's On the Road. The show began with Parks on his motorcycle, stopped at a traffic light, and the motorist next to him starts the following conversation:

In spite of a dreary pilot episode, which included such clichés as a runaway bride (played by a young Bonnie Bedelia), the series itself had some fine moments. One episode, "A Long Trip to Yesterday," included singer Slim Galliard ("Cement Mixer, Putti Putti," "Yeproc Harisi"). Other guest stars included Keenan Wynn, Bruce Dern, Elsa Lanchester, Buffy Sainte-Marie, Kurt Russell, and baseball great Don Drysdale. It dealt with environmental issues, the plight of American Indians, gambling addiction, the relations between the Amish and the modern world, and occultism. Had I been included, I'm not sure which episode I would have appeared on, but I don't think it would have been "Your Love is Like A Demolition Derby in My Heart." (Honest, there really was an episode with that title.)

"Then Came Bronson" got some publicity a few years ago when Chicago Tribune columnist Bob Greene reminisced about the show. It seems he was obsessed with the "mother-daughter" episode ("A Famine Where Abundance Lies") of TCB, in which an attractive widow and her gorgeous teenaged daughter both fall for Bronson. "It sounded like the ideal form of courtship," Greene wrote. See http://www.jewishworldreview.com/bob/greene011901.asp Greene's obsession with beautiful women eventually caused his downfall, when it was revealed he took sexual advantage of a seventeen-year-old high school student who had been the subject of one of his columns. (He says the affair stopped short of sexual intercourse, but the whole episode did serious emotional damage to the woman involved.)

Greene's summary of the show is pretty accurate: "'Then Came Bronson' was a one-season series [1969-1970] about a man on a motorcycle. Michael Parks played Bronson, who mumbled and murmured so that you could understand only about 10 percent of the dialogue, who rode off to a different town every week, who had zero lasting relationships in his life, and who had no visible means of support." He concludes that it's one of two shows he really loved.

I hope I haven't bored you thoroughly with Bronson and my brush with network television. But this kind of reminiscence isn't all bad, even it it's just an escape from depressing current events. Maybe Bronson's best advice is his signature line: 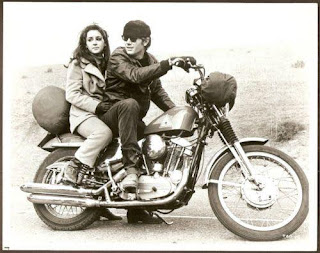 Posted by steve on the slow train at 9:58 PM

steve on the slow train said...
This comment has been removed by the author.
10:40 PM