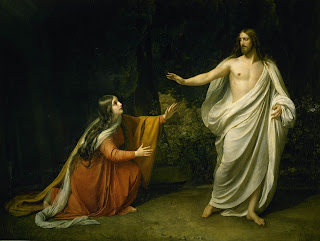 We don’t know a great deal about the first generation of Christians, especially the women. But in the case of Mary Magdalene, we seem to “know” too much. Her name is mentioned only thirteen times in the New Testament, but for centuries, Christians have “known” she was a prostitute. In more recent years, others have claimed she was Jesus’ wife, who bore his child, and whose descendants later founded the Merovingian dynasty of France.

Her identification as a prostitute was cemented in 590 by Pope Gregory I, who, in a sermon on Luke 7:36-50, said: “The one that Luke calls a sinner, and that John names Mary [of Bethany, John 11: 2], we believe that she is that Mary of whom, according to Mark, the Lord has cast out seven demons [Mk 16: 9]. And what are these seven demons, if not the universality of all vices? Since seven days suffice to embrace the whole of time, the number seven rightly represents universality. Mary had seven demons in her, for she was full of all vices. But now, having seen the stains that dishonored her, she ran to wash herself at the source of mercy, without blushing in the presence of the guests. So great was her shame inside that she could not see anything outside to blush.”

Gregory uses the example of the penitent woman to criticize bishops “who look down upon their flock with contempt, to disdain all the sinners who meet in the people, to refuse to sympathize with those who confess their faults to them, and finally, like the Pharisee, not to be touched by the sinful woman.” It’s a fine sermon, but its conflation of the penitent woman with Mary Magdalene, as well as with Mary of Bethany, distorted the image of the first witness to the Resurrection. However, it did provide a role model for “fallen” women—that Christ himself would hold up this penitent woman as an exemplar of faith. It was not until 1969 that the Roman Catholic Church declared she was not the “woman in the city” of Luke 7.

In more recent years, Mary Magdalene has been named Jesus’ wife. Dan Brown’s “The Da Vinci Code” (2003) popularized the theory, but he took most of his information from “Holy Blood, Holy Grail” (1982), by Michael Baigent, Richard Leigh, and Henry Lincoln. The book’s authors claim that the Holy Grail (Sangraal or Sangreal in Old French), was really Royal Blood (Sang Raal or Sang Real), and that Mary Magdalene fled to Gaul after the Crucifixion, where she bore Jesus’ child, whose descendants founded the Merovingian Dynasty of France. She, of royal blood from the House of Benjamin, and not any chalice, was the Holy Grail. The book’s theories have largely been discredited by Biblical scholars, but the Da Vinci Code, along with the 2006 movie based on the book has a lot of staying power. The noncanonical Gnostic Gospel of Philip, probably written in the third century, says “The companion of the [savior] is Mary of Magdala. The [savior loved] her more than [all] the disciples, [and he] kissed her often on her [mouth].” (Marvin Mayer translation from the Coptic—anything in brackets is guesswork.) But none of the Gnostic texts which mention her claim she was Jesus’ wife, or that she bore his child.

So what do we know about Mary Magdalene from Scripture? All four canonical Gospels were written in the late first century—much closer to the time of Christ. From Luke 8: 1-3:

“After this, Jesus traveled about from one town and village to another, proclaiming the good news of the kingdom of God. The Twelve were with him, and also some women who had been cured of evil spirits and diseases: Mary (called Magdalene) from whom seven demons had come out; Joanna the wife of Chuza, the manager of Herod’s household; Susanna; and many others. These women were helping to support them out of their own means.” (NRSV)

Mary was most likely wealthy and had been cured of serious afflictions. And, of course, in all four Gospels, she was the first witness, or one of the first witnesses to the Resurrection. As such, St. Thomas Aquinas called her “The Apostle to the Apostles.”

There is one curious matter about her name. For centuries, it was assumed that she was from the village of Magdala on the Sea of Galilee. But it appears that the village was called Magadan, and was misnamed by a cartographer. In Luke, she’s “Mary (called Magdalene.)” And Magdalene, or Migdal, in Aramaic, means “tower.” Some historians have speculated that just as Jesus gave his disciple Simon bar Jonah the nickname “Rock” (Cephas or Peter), renamed Mary the “Tower.”

July 22 is the day we remember Mary Magdalene, “The Apostle to the Apostles,” and perhaps “The Tower.”

Posted by steve on the slow train at 9:49 AM