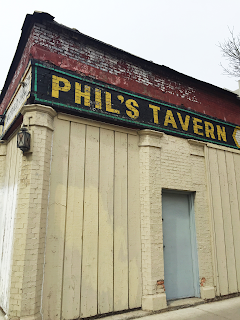 In December of 1966 I was a 15-year-old high school sophomore who had just joined the University High School (Iowa City) chapter of the Students for a Democratic Society. And thanks to a family trip to Chicago, I had the opportunity to visit the SDS national headquarters. We were staying with family friends in Elgin, so I took the Milwaukee Road commuter line to Union Station. I should have simply taken the West Madison bus, but I wanted to ride the L, so I walked up to Clinton and Lake and boarded the Lake Street L. I wasn't familiar with the “A” and “B” stops, so I just got on the first train headed west.. It happened to be a “B” train, so it went right by the Ashland stop, which would have put me within a few blocks of the SDS headquarters. I got off at California Avenue, much farther west than I needed to be, and in the heart of the West Side ghetto. I walked south to Madison Street, where I paid another 45 cents to board an eastbound Madison Street bus.


Chicago was one of America's most segregated cities, and the neighborhood around Madison and California was a solidly black and poor one. Strangely enough, I don't remember any stares from riders on that Chicago Transit Authority bus, even though I must have been the only white person on board. I vaguely remember a couple of blocks where most of the residents looked poor and Asian—perhaps a northerly extension of Chinatown. But I got off the bus at or near Ashland and found my way to the second floor of a nondescript building on the north side of the street.


My visit to SDS headquarters was anticlimactic to say the least. Carl Oglesby wasn't there, nor was anyone whose name I knew. There was a a harried-looking young woman, busy at her typewriter, who had no time to talk. I looked around the lobby of this, the headquarters of the most prominent radical student organization, which could have been mistaken for a dentist's waiting room, took a few pamphlets, and went back downstairs to catch the West Madison bus back to the Loop.


In those days, West Madison was Skid Row. A few blocks east of Ashland most people on the street were white. Most looked middle-aged or older. The street was lined with taverns, cheap restaurants, and Single Room Occupancy hotels, all of which catered to people down on their luck. The Starr Hotel, which I passed but don't specifically remember, was infamous because just a few months earlier, Richard Speck, who had murdered eight student nurses, was found there. Nearly fifty years later, memory has become a blur, mixed with later scenes of Chicago streets, and appears to me as a sort of Ashcan School image, with ghostlike figures in drab overcoats standing on the sidewalk or walking in and out of the taverns and flophouses. 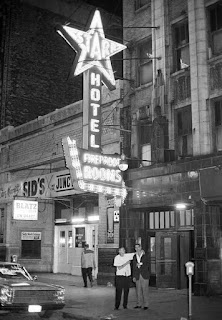 I got off the bus at Canal Street, near the majestic North Western Station, and walked the two blocks south to Union Station and the commuter train to Elgin.


Recently, while on a layover between the Lake Shore Limited from Elkhart and the California Zephyr to Galesburg, Illinois, I had a few hours to kill, so I decided to wander west from Union Station. I walked west on Jackson until I came to a small one-block park. It made sense to head north, and after walking a couple of blocks on Adams, I turned north toward Madison.


It was, as I expected, no longer Skid Row. The transition from downscale to upscale had begun in the early 1980s with the opening of Presidential Towers, which was built on the site of the Starr Hotel. The taverns and flophouses were gone, replaced by condominiums, trendy restaurants, day spas, dog grooming salons and boutiques. Instead of middle-aged men down on their luck, there were beautiful young men and women, their skin tanned, oiled, and glowing. I imagine that many of those Skid Row denizens of 1966 bore tattoos that were mementos of service in the Pacific. In 2015 I noticed a young woman sporting an artistically designed armband tattoo that probably set her back a few thousand dollars. It was certainly more tasteful than the “Death Before Dishonor” inks of the World War II era, but surely less genuine.


There was one holdout from the Skid Row days—the shuttered Phil's Tavern, which appeared to be on the way towards demolition or renovation. In any case, this single reminder of the street's past would soon be gone or turned into another upscale establishment. Pete Anderson, of the blog, Pete Lit,researched the name and location of Phil's Tavern, and found nothing except for a Google Street View image from May, 2014, showing the building with a shingled awning obscuring the sign. That probably accounts for the sign's easy readability. “Based on the drab exterior and the tiny size of the building,” Anderson writes, “it's probably safe to say that Phil's used to be a nondescript, hole-in-the-wall dive, perhaps dating back to the era when this stretch of Madison was the city's skid row.”


Closer to Ashland the neighborhood had become less trendy, but was still no slum. The block where the SDS headquarters had been was now greenspace. But there was one other interesting holdover: the Palace Grill and Sandwich Shop near the corner of Madison and Ogden Avenue. The building appeared to be new, but its owners had preserved the weathered neon sign proclaiming the place had been around since 1938. It had adapted to the changing neighborhood, offering sandwiches on ciabatta bread and a complete line of official Chicago Blackhawks merchandise.West of Ashland I could see the gigantic United Center, where the Blackhawks and Bulls played, looming ahead. It was time to head back to Union Station. 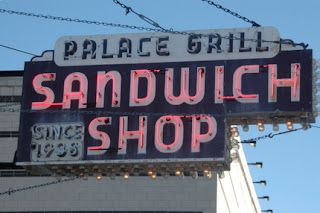 It's easy to ridicule the Young Urban Professionals, or Yuppies (the term has been around since the early 1980s, if not before). Still, I have to remind myself that they have chosen to live in the city. They're living in lofts, condominiums, and apartments, and not in McMansions built out in the exurbs, where farmers recently were growing corn and soybeans.


The West Side has more than its share of slums, but this stretch of West Madison was no longer one of them. It's hard to feel nostalgia for Skid Row. But the place did serve a purpose. The down-and-out are still with us, and the SRO hotels, which gave them a relatively safe place to stay, are mostly gone. They're completely gone from the old Skid Row.


In the world of 1966 there was still a profit to be made from the down-and-out, and while the owners of the SROs weren't always admirable men, they did provide a service that today's entrepreneurs don't. And cash-strapped social service agencies aren't in a position to fill the gap. Nor are charity-run shelters such as the Pacific Garden Mission. So yes, one can mourn the loss of Skid Row, if only because it made life a little more bearable for the poorest among us.

I used the term Skid Row in class last year and got a lot of blank stares from my students.

re: Phil's Tavern. Looking for more info. This is ll I could find:

In a diversity action, filed in the district court at Chicago, Illinois, by citizens and residents of the state of Michigan against citizens and residents of the state of Illinois, plaintiffs Mary Ann Waynick, Wilma Ann Scruggs, and Carl Mack Waynick, Linda Kay Waynick, Nellie Sue Waynick and Alice Faye Waynick, minors, by Mary Ann Waynick, their mother and next friend, sought recovery of damages sustained by them, when an automobile under the control of Bruce Sims, its owner, and driven by Johnie E. Owens, collided on U.S. Highway 112 in the state of Michigan with an automobile driver by William Gerald Scruggs, who was killed in the collision. Plaintiffs' complaint named as defendants Chicago's Last Department Store, an Illinois corporation, Philip Saxner and Rubin Saxner, doing business as Phil's Tavern, and William Turbin, doing business as Matlan Liquors, who were engaged in the business of selling and furnishing intoxicating liquors in the state of Illinois.

The building is still there, but Phil's hasn't been open for many years. The facade had been covered up for a long tine, and that cover was just taken off a few years ago. Considering how much development there is in the neighborhood, I assume it will eventually be razed so that a big, shiny box can be buult there.

Hi, Phil’s Tavern belong to my 2nd great-grandfather. His full name was Filippo Pescio and came to America in 1902. He Americanized and became Philip Pesch. He opened and ran his Tavern in the early 1940s with help from a few of his 7 sons. As the depression hit this area, it did become skid row in the early 1950s. Before it was a family ran business by immigrants looking for a new life. Please be more considerate as you tell this story around Phil’s Tavern, he put a lot of heart and soul into building a new start when he arrived and struggled. He also fought both world wars for the USA.

Phil's Tavern was demolished on June 17, 2021. I wrote about it in this blog posting.

I live in the West Loop, and for what it's worth, I would hardly call myself a "yuppie." :D